Drag the movie to rotate the view in any direction.

An Introduction To The History of King's Manor, York.

King's Manor is a Grade I listed building in York, England. Originally built to house the abbot of St. Mary's Abbey close by. The Abbot's house probably occupied the site since the 11th century, but the earliest remains date from the 15th century.

Henry VIII was created Duke of York in 1494. St Mary's Abbey was dissolved in 1539, Henry VIII instructed that it be the seat of the Council of the North. After the dissolution of the monasteries, the building was retained by the crown and many monarchs stayed here, including Henry VIII, with Catherine Howard his 5th wife, and James VI of Scotland on his way south to be James I of England. In his honour a magnificent gateway was added to King’s Manor with figures representing Justice, Prudence and the Sun.

James’ son, Charles I, became Duke of York in 1604. As King, he established the Council of the North at King’s Manor, making York the capital of the North, and he stayed here immediately before Civil War broke out. His coat of arms is still above the doorway. During the Civil War and the Siege of York, King’s Manor became the Royalist headquarters. It performed this role until the Council was abolished in 1641.

Following the Civil War, the building was hired out to private tenants until the 19th century, when it was taken over by the Yorkshire School for the Blind. The Principal's house, now home to the University's Centre for Medieval Studies, was built in 1900 but looks much older. On the departure of the Blind School in 1958, the Manor was acquired by City of York Council, who leased it to the University in 1963. York University later moved to their purpose built campus near Heslington, but kept these buildings now home to the departments listed below. 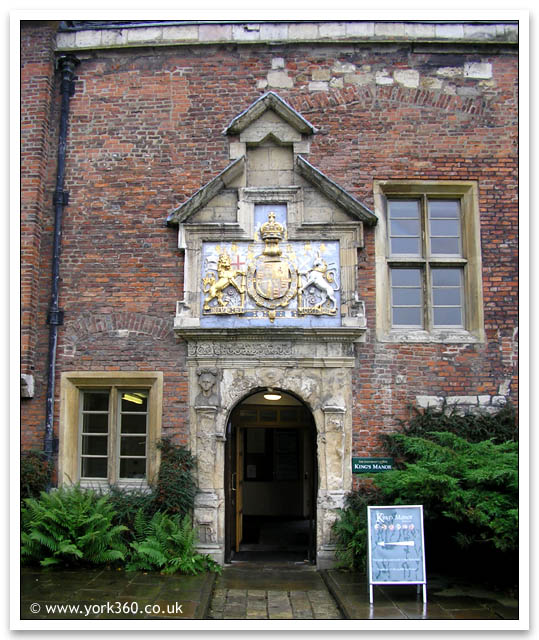 (above) Entrance to King's Manor, showing The House of Stuart Coat of Arms.
Since repainted! Newer photo here