Most of these interactive movies were taken during the half term break in October. York was buzzing as usual with tourists and shoppers but we managed to find some fairly clear places to take these wide photos. We hope you enjoy our tour of York. Please contact us if you can recommend a view of York that we have not shown.

York Minster - movie
This photo doesn't show the two towers on the west face but the sun lit up this south side well. The Canon of York Minster was walking past, thinking 'what are they up to?'

Treasurer's House - movie
This peaceful walled garden is very well kept and has some ornate old statues. As I was taking this photo the curtains opened and shut on one of the very top attic windows (maybe one of the former inhabitants that haunt this old manor!) You can also see the Chapter House, part of the Minster opposite the house.

The River Ouse - movie
Taken on the balcony next to the Orgasmic Bar (now Revolution) on the north bank. Looking right along the River Ouse towards Lendal Bridge. Looking left is Ouse Bridge. On the opposite south bank: on the right is the large Norwich Union Offices (now Aviva), towards the left is the Park Inn Hotel .

York Castle Area (The Eye of York) - movie
This photo shows Clifford's Tower, the Law Courts and in one corner of this square is the entrance to York Castle Museum.

York Millennium Bridge - movie
A modern foot/cycle bridge inspired by the spokes of a bicycle wheel. There are some great cycle paths along side the river banks. You can also see the popular boat cruises that go to Bishopthorpe Palace.

The City Walls - movie
This photo was taken on the stretch of walls between Bootham Bar and Monk Bar. It is narrow on this part of the wall and you often have to give way to other walkers. You get some great views of The Minster and private gardens. From here you can see behind Treasurer's House. If you look over the wall you will see St. Johns University on Lord Mayor's Walk.

NRM Great Hall - movie
A look at some of the trains inside the National Railway Museum. A fantastic museum with free admission! Movie submitted by batears2000. 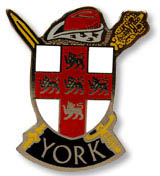