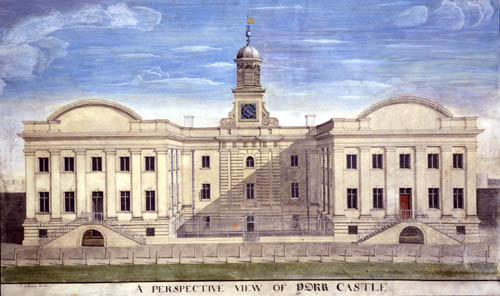 Spend a day where others spent a lifetime..
The infamous cells of York Castle Museum, are unlocked, unleashing the powerful, moving and sometimes gruesome tales of those that were once imprisoned there.

York Castle Museum's new experience, York Castle Prison, plunges visitors back to the time when the building was used to house the county's worst felons and debtors. By winding through the cramped authentic cells people can explore the dark, dank conditions prisoners were kept in and learn about their crimes and their punishment.

Mike Woodward, director of business development, said: "From the infamous highwayman Richard Turpin, to a young tearaway arrested with a boiled egg in his pocket, York Castle was once full of people with incredible and often moving stories to tell. Many of the authentic cells still remain here at the Castle and for the first time we will be using these to take an in depth look at this building's fascinating history."

Get a sense of what imprisonment would have been like in a 18th and 19th Century gaol. The cells will be dark and eerie, with the sound of keys, chains and prisoners echoing around the corridor. In the cells visitors will meet characters displayed through the latest audio visual technology. They are all based on real prisoners, each with a very different and thought provoking tale to tell. These include a gaoler, thieves, debtors and of course Richard Turpin. The latter was kept in the gaol before being hung on the Knavesmire (now York Racecourse) and visitors at the time paid good money to meet the notorious criminal.

New research for the project by Dr Katherine Prior has shown that Richard Turpin, the name he was known by at the time, was in fact kept in a different cell area to the one presumed. The new interpretation puts the character of Turpin in this correct area, which would have been the condemned cells at the time of the highwayman.

The second half of the gallery will allow people to find out more about the fate of the prisoners, their release, death or transportation to the colonies. There will also be the chance to see objects from the prison, dig deeper into the past of the gaol and even look up your surname to see if any of your ancestors could have been imprisoned there.

Open daily from 9.30am until 5pm, except 25 & 26 December and 1 January. (We open at 10am on Fridays during school term times) We usually close early in the afternoon on 24 December and 31 December.
www.yorkcastleprison.org.uk

York Castle Museum is in the centre of York, close to Clifford's Tower and the Coppergate Shopping Centre. Follow the green pedestrian signs to the 'Castle Area'.